No products in the cart.

The Bonanno Crime Family is one of the Five Families that dominates organized crime in New York City. It originated from the picturesque Sicilian seaside fishing village of Castellammare del Golfo, Sicily. 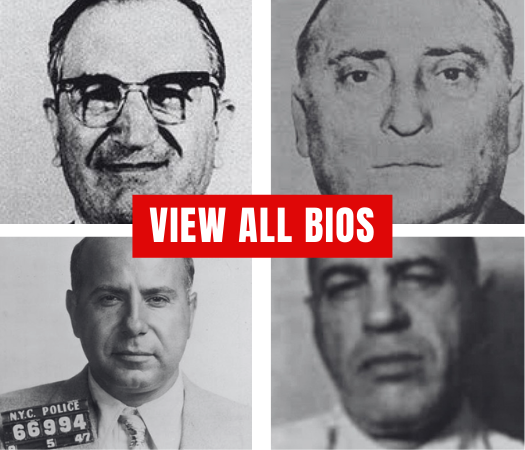 According to mob historians, the Bonnano Family began under the leadership of Sebastiano DiGaetano.

Later, a Cola Schiro would lead for a time as a weak sister until the threat of death to all the Castellammarese by (Joe the Boss) Masseria would ultimately catapult Salvatore Maranzano to leadership during the tumultuous “Castellammarese War” years and the violence that would follow in the late 1920s to early 1930s.

After the Castellammarese and their allies had defeated Masseria and subsequently with Maranzano’s own killing, the leadership of the borgata fell to Giuseppe (Joe) Bonanno who would go on to lead one of the most tight-knit, secretive, and cohesive Family memberships for the next 35 years. With little fanfare or public exposure, it allowed Joseph Bonanno to accumulate one of the greatest wealth of any mob boss of his era.

The Rise of Joe Bonanno

With power bases in gambling, shylocking, legitimate business holdings, and international heroin smuggling through its satellite regimes in both Montreal, Canada and Sicily. the Bonanno’s were a very influential Family across the entire United States, with members as far away as Arizona, California, Canada and the Trapani Province of Sicily.

But by the mid-1960s, Joe Bonanno’s heavy-handed leadership style, greed, and ambitions would be not only his personal undoing but also the undoing of the Family at large. It led to the so-called "Banana War” which tore at the very fabric of its membership - a strife-torn Family that, to this day, has never fully recovered to the prestige and power it once enjoyed!

What follows below is an A-Z listing of in-depth biographies for many of the Bonanno Family's more interesting members and associates.

Alfred (Al Walker) Embarrato was a Bonanno Family soldier who was suspected of ordering the hit on his nephew, the notorious Tony Mirra.

Joe Bonanno was one of the original mafia bosses in the U.S. and one of the most infamous, wealthiest, and most controversial to ever operate.

Paul Sciacca was a low-profile Bonanno mafioso who was catapulted to acting boss during the Family's volatile Banana War years.

Carmine Galante was one of the most powerful and feared of the Mafia bosses until he met his fate during a Bonanno power struggle.

Philip (Rusty) Rastelli was a one-time boss of the Bonanno Family who eventually stepped down allowing Carmine Galante to once again rule.

Michael Adamo was once acting underboss of the Bonnano Family until he wasn't anymore because of an internal Family conflict.

Carmine Galante of The Bonanno Crime Family was one of the most powerful bosses in Cosa Nostra - A Mafia Tsunami who met an untimely end over a Family power struggle. Aside from narcotics trafficking, he was involved in other activities as well and had a host of associates to help him along the way.

Rusty Rastelli was the one-time mafia boss of the Bonanno Crime Family. Originally hailing from the gritty Greenpoint section of North Brooklyn, Rastelli would rise up from a common street hoodlum and gunman to eventually reach the very pinnacle of organized crime in New York City.

In this twisted tale of mob mayhem, Bonnano mobster Joseph Genna found himself in the middle of a murder mystery after a labor union official named Edward Murtha was found shot to death in his Babylon, New York office. It seemed like a typical mob hit, but there were more twists and turns in this tale than a made-for-tv movie.

Joe Ianni was a Texas-based mafioso active in narcotics and gambling who served as a soldier in the Joseph Civello Family of Dallas, Texas.

The Guarnieri Regime Leadership chart lists the membership of this regime based in Binghamton, New York headed by Anthony Guarnieri.

Are you sure want to cancel subscription?